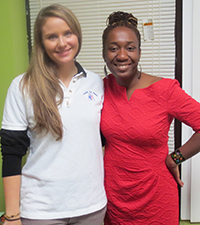 From the Field – Jennifer Lang, Director of Program Communications
On Saturday, January 11th – one day before the four-year anniversary of the destructive earthquake which hit Port au Prince, Haiti – a diverse group of Chicagoans gathered to discuss Haiti’s road to the future. The “Haiti, Demain” conference (meaning “Haiti, tomorrow” in French), organized by the Association Nouvelle Image d’Haïti was held at the Pan-African Association on Chicago’s north side. Speakers included Lesly Conde of the Haitian General Consulate, David Tilus of G.A.F.E. – a group working towards local community development in Kenscoff, Haiti, members of the Bomba con Buya group who performed musical rhythms shared throughout the Caribbean, and Professor William Balan-Gaubert of the University of Chicago. Conference participants had a chance to discuss the importance of decentralization, methodologies of development, and historical influences on contemporary Haitian affairs. We also previewed a new game show that aims to educate people on Haitian culture called “Haiti, Je Connais,” meaning “Haiti, I know.”

Hope for Haiti is pleased to participate in conferences like this, which help promote a positive image of Haiti throughout the international narrative. For more information on “Haiti, Demain,” please contact Marleen Julien at marleenjulien@gmail.com. We also hope you will consider attending “Unity Day,” to be held on January 18th at Evanston’s Levy Center, starting at 6pm and sponsored by the Consulate General of Haiti in Chicago.