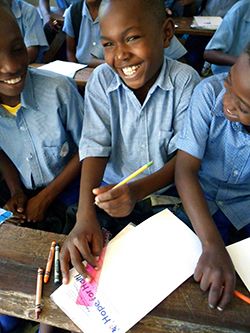 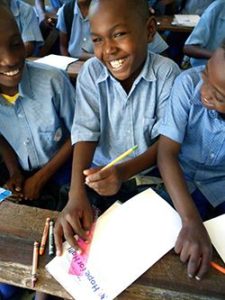 “Education is the key to success.”

For there to be a certain balance in society, people must have access to education. However, in certain countries economic difficulties make the path to education a difficult one.  For example, when you consider the amount of children that regularly attend school and the literacy rate in Haiti, it is clear that, for many in Haiti, education is still a kind of luxury. By providing teacher salary subsidies to 25 schools in Haiti’s South, Hope for Haiti helps to increase access to education.

On a routine site visit to one of Hope for Haiti’s partner schools in Baraderes, I had the chance to interview the school Director, Sr. Affricot Fredony. The sister introduced me to a 1st grade student that wished to share some of her difficulties with me.

Kelita Beauvil is a 1st grade student at a school tucked away in the rural mountains that Hope for Haiti has supported since 2006. Kelita is the youngest child in a family of five people. According to the Kelita, her parents lack the means to take care of her family.  Last year Kelita graduated from the 3rd year of preschool, and moved on to Primary school.  At her school, each student is typically required to pay for his/her own graduation fees. During my visit Sister Affricot explained that, last year, Kelita’s parents didn’t pay her graduation fees and never gave the school an explanation as to why.

Despite the family’s economic troubles, Sister Affricot explained that the school accepted Kelita into its 1st grade class. She explained that there are two main reasons the school made this decision. The first reason is that the school receives financial support from Hope for Haiti. This relieves the burden on the families in the community who are unable to pay their school fees. The second reason is that Sister Affricot claims that she holds the same values as Hope for Haiti.  Namely, the promotion of widespread access to education, particularly in Haiti’s rural areas, is extremely important to the Sister.

In closing, the example of Kelita Beauvil demonstrates that it isn’t sufficient to simply look at the disease. The most important thing is to find a cure.  Hope for Haiti works hard everyday to find practical cures for some of Haiti’s worst socioeconomic problems, including lack of access to education and healthcare.